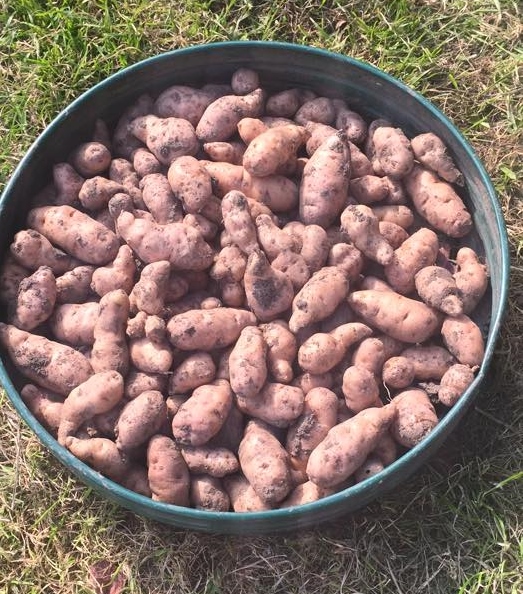 Growing veggies rewinds me back to being a giddy 6 year old. I marvel at, and become overly excited by, the sight of plants producing big, fat veggies. That teeny, tiny seed I saved from last year and sowed this year has turned into a monster plant laden with…….and here’s the exciting bit….stuff that I can actually eat!

The most childishly joyful part of veg growing though is, surely, the unearthing of our root crops. We never know quite how well (or badly) they have done until we pull them or dig them out of their earthy beds. Carrots

and parsnips invariably draw giggles as they come out of the ground in all their misshapen, sometimes naughtily so, glory….and there will always be the prize parsnip, longer than anything we’ve ever grown before, which cannot be eaten until at least half of our friends, family, facebook pals have had a chance to marvel at it’s size…..

But the best, the absolute best, is doing a ‘pirate’…..(fancy dress is not obligatory but does help)……when we go digging for buried treasure. Except the treasure isn’t gold but, rather, potatoes. I will never ever cease to be made a bit giddy by this act. Where to place the fork? Too near and you may spear them…….too far and you may miss them….. The act is best performed after a few dry days….but, heck, never mind waiting there’s treasure to be found. All potato digging should be done with a pirate accent. Arrrrrrrr.

Weeks later, the now idle potato bed is ready to be dug over and sown with winter green manure……..but wait……..the treasure still comes….clearing the beds for autumn/winter sowing and revealing yet more of these little treasures I can’t help but let out little squeals of piratic joy.